I got an infrared sauna

I have completed one of my three New Year’s resolutions which was to buy an infrared sauna to improve my health.  I had been looking online for new and used saunas for a couple months.  I first learned about infrared saunas from my doctor who used to have one at her office.  After I would do intense emotional therapy sessions, I would use it to help detoxify my emotions in a physical way.  I would also use it to loosen up before a massage.  I love going to spas that have them along with steam rooms, dry saunas, pools, etc...  I haven’t used them as regularly as I used to when I was doing deep emotional work at my doctor’s old office.  At best, I would make it once a week sporadically and, at worst, every 6 months!  Going places and paying to use saunas is so time consuming and expensive.  I went a couple times in December during my liver cleanse and since I got a Groupon it wasn’t too bad but it was thirty minutes round trip.  My last nutraevaul (it’s a blood test that tests me for nutrients) had me high in tin!  I actually quit drinking canned water for the most part and have been taking a chelate supplement in the morning and night.  I also messaged the canned water people to ask about alkaloids being in the aluminum and they said yes, they can have them.  I don’t eat a lot of canned food so that’s really the only thing I could think of that would be making me high in tin.  The infrared heat has so many benefits pain relief, detoxification, weight loss, mental benefits, good for the skin, and more.  I was going to hot yoga when the lockdowns started and feeling great.  It had taken me a long time to build up the courage to go to yoga since I can’t do so much stuff and it’s embarrassing (see blog post “I can’t do down-dog”).  Having the studios closed for pretty much a year has been a huge blow to my health.  I definitely felt toxic before I started going. Once I was going I felt like I was living instead of dying.  When the CCP virus emerged my doctor sent out a to do list for virus prevention.  One of the things to do was sweat for 20 minutes everyday. I had not been doing that which I know is very irresponsible.  I had also gained about 17 pound over the year year which was incredibly irresponsible as well.  I did, regretfully, fall into the trap of blaming my governor for my weight gain and lack of exercise.  Although I know I could achieve weight-loss and sweating through moving my body I knew having an infrared sauna would make it that much easier to break past those obstacles. I had seen some used saunas for $800- $1500 online and new ones for $1300-$1500.  I didn’t want to pay practically the same for a used one as a new one so I was very happy to see an infrared sauna on Offerup for $400 one day.  I messaged quickly and didn’t hear back.  The next day it was $700.  I messaged again that I would buy it for that.  The gal selling it said she priced it too low initially, something she realized after getting tons of offers.  She had someone coming to look at it later that day and if they didn’t want it, it was mine. Luckily the person changed their mind!  It’s probably important to note that I am very friendly when using Offer up which I think is how I got next in line.  I use happy faces, LOLs, and exclamation marks.  I got in my boyfriend’s truck and we ventured off south of Seattle to pick it up from a couple in Federal Way or Kent.  They were very nice.  They had barely used it and already taken it apart.  Having recently moved and not used it much they didn’t want to set it up in their new place. I handed over the cash and we all loaded it into my boyfriend’s truck and were on our way.  I got it set up about a week later due to needing enough free time and clearing space to put it.  I happen to have a long narrow bedroom and there is space for it next to the bathroom door.  I used it the first night and unplugged it, when I plugged it back in, it wouldn’t turn on.  I was so scared it was broken.  After fiddling with it, it came back on.  I will not be unplugging it from the wall again! I’ve had it for about a month and using it 4-5 days a week so far.  Some of the saunas I’ve been using have a built in TV screen.  Mine doesn’t so I set my iPad on a stool outside the door or I read my Epoch Times newspaper or I can listen to a CD or radio since it has speakers and a stereo.  So far I feel calmer and less pain though I do think it’s going to take some more time of using it before I feel like I’m living and not dying again.  I’ve built up too much toxicity from not exercising and sauna-ing during the lockdown (my fault.  See “Your health is your fault” blog post).  Nevertheless, I am doing something about it now! 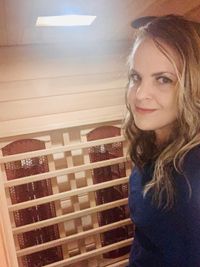 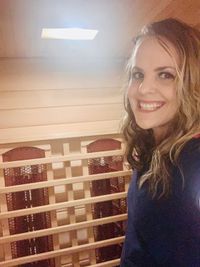